Over the last month I’ve been working with our tech team to set up the project’s crowd-sourced portion, so we can get everyone involved through Zooniverse. It’ll give us a way to easily log the covenants and other details into a database, which can then be joined with spatial data to come alive in our GIS map. And we’re nearing completion! We should have something to officially unveil pretty soon. All the while, I’ve been busy chipping away at the research for another aspect to our mapping project:

To that end, filmmaker Lorenzo Dickerson and I have begun digging through all of the property records of John West. Here was a black man born enslaved by a white professor at the University of Virginia, and 35 years after the Civil War ends, he owns half of Afton Mountain, 500-acres in Barboursville, multiple houses and store front along Main Street in Charlottesville, the building next to the Paramount Theater on Third Street NE, and more than 90 other properties spread throughout the city. He was one of the largest single property holders, black or white, in the area. And sure, the city named West Street after him, and Westhaven. But what else do we know about the man?

For starters, when did he buy his first property? 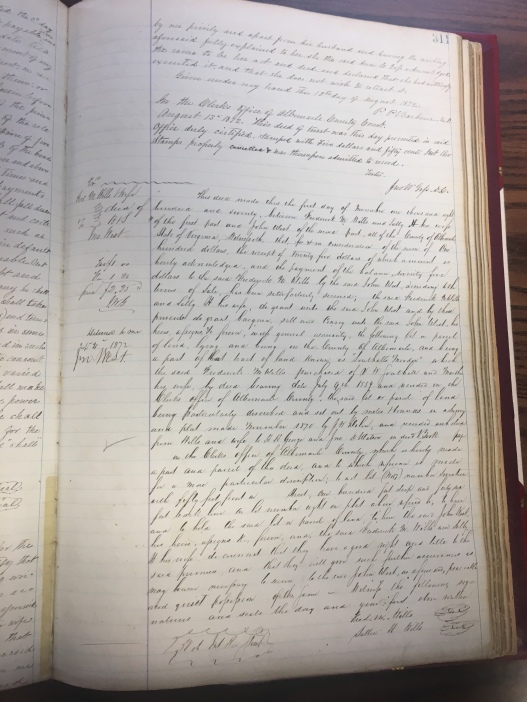 Not too long ago, I got a text from the Jefferson School African American Heritage Center’s Curator of Education Elizabeth Klaczynski, saying that she’d been digging through records at the Albemarle County Courthouse and found what appeared to be John West’s first property purchase.

This deed made this the first day of November one thousand eight hundred and seventy, between Frederick M. Wills and Sally H. his wife of the first part and John West of the second part…that for and in consideration of the sum of One hundred dollars…the said Frederick M. Wills and Sally H. his wife, do grant unto the said John West…the following lot or parcel of land, lying and being in the County of Albemarle, and being a part of the tract of land known as ‘Southall’s Meadow.'”

Southall’s Meadow? It didn’t ring any bells. And normally that’s okay, because most deeds give reference within the deed to the prior deed or plat of land, which you can then track back to help answer the question: Where exactly was Southall’s Meadow?

But several lines lower down in the record, in the place where it should stipulate the prior deed and page numbers, there are two big BLANK spaces:

So what do you do when you are totally clueless and it involves court records? You turn to Sam Towler of course. Sam’s probably forgotten more than we will ever know when it comes to all things historical in this region. And sure enough, Sam sent me a project he’s been working on in his free time that indexes all of the land surveys. And there, on July 9, 1859 for $3,500, was reference to the record of Valentine Wood Southall selling 12 acres known as “Southall’s Meadow” to Frederick M. Wills. In the deed, the boundaries of the property are given as follows:

South:  The road running to the University

West: The road connecting Poor House Rd and the road from Main St to the University.

This raised some flags for me, but I thought, “Nah, it couldn’t be.” So then I dug up the referenced survey from 1870 that Sam had found, which accounts for the first subdividing of the property.

And low and behold:

Does that look familiar? 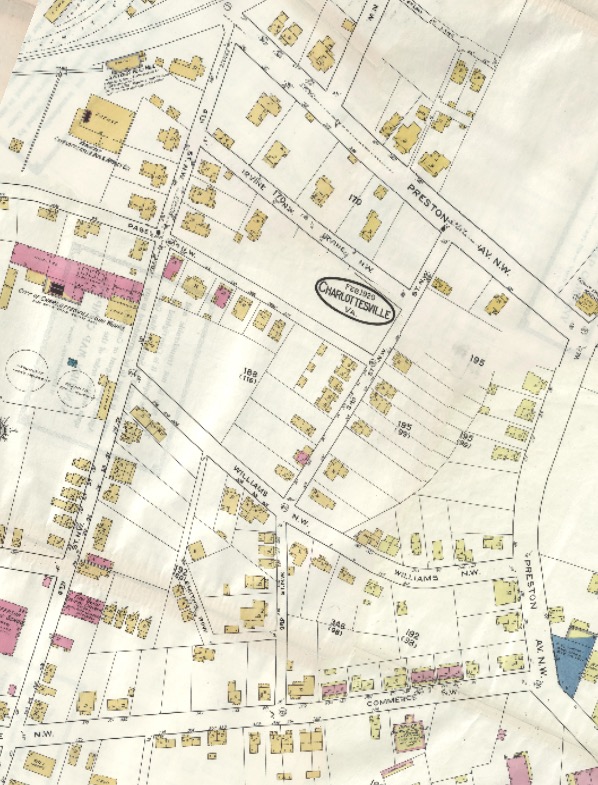 Yep, this is the initial subdividing of what would later become Vinegar Hill, the center of the Black economy for decades until the white City government bulldozed it in 1963, displacing hundreds of Black residents and shuttering more than two-dozen Black owned businesses.

And these records show that two of the very first properties ever sold after “Southall’s Meadow” was subdivided were to John West, a 20-year old Black man, who went on to become one of the wealthiest land-owning residents Charlottesville has ever seen. Amazing.

And here’s where the story gets oh-so-very Charlottesville. That guy Frederick M. Wills, the one who sold the property to John West? Well, he bought the 12-acre tract of land from Valentine W. Southall, a white man who served as Albemarle County’s delegate to the Virginia House of Delegates on-and-off from 1833-1846, where he was elected Speaker by his peers for two terms.

He was also a buddy of Thomas Jefferson’s; he was the first secretary for the Board of Visitors at UVA; and like Jefferson, he amassed his wealth and success by enslaving people.  [Weird fact: Southall’s great-grandmother was the sister of Patrick Henry (“Give me liberty or give me death”).]

As a legislator, Southall initially opposed Virginia seceding from the Union and voted with the majority against Secession on April, 4, 1861. But three days after the Battle of Ft. Sumter ended on April 14th, he changed his vote. And shortly thereafter, Virginia became the 8th state to secede.

Southall died later that same year, leaving his property and the people he enslaved to his widow and children.

His house, however, sat about a half-mile east of “Southall’s Meadow,” on present day Market Street.

If you look closely, you can see the First Baptist Church on the right, situated at the corner of 2nd Street NE and East Jefferson Street, where the Queen Charlotte condos are today.

So where is this house today?

Paul Goodloe McIntire had it razed in 1917 to make way for the park and statue of Robert E. Lee that he commissioned and installed in 1924. But before that, Southall’s daughter ended up living there with her husband Charles Venable, for whom the city named one of our elementary schools. Venable, who enslaved people and came from a long-line of enslavers, taught mathematics at UVA, fought in the Civil War as Robert E. Lee’s aide-de-camp, and was an advocate and architect of the Lost Cause narrative, according to Encyclopedia Virginia.

So, at the same time that Venable was living in Southall’s former house, working to construct this massively destructive Lost Cause propaganda campaign, the ramifications of which are still being felt today on that very same property — John West was acquiring  Southall’s other properties, a move that would eventually lead to the most thriving concentration of Black doctors and dentists, businessmen and women, hoteliers and restauranteurs, funerary directors and morticians, musicians and painters, carpenters and builders that Charlottesville ever saw.

• Contact Us For Details On The Next Deed Logging Workshop

This week I had the huge honor of taking students in @aschool_uva Prof. Erin Putalik’s course “The American House” on a walking tour of the Lewis Mountain neighborhood.
TOMORROW (Thursday—12/9/2021) at 7PM: Join Karen Waters-Wicks, Michele Claibourn, Ridge Schuyler, and Jordy Yager for a Zoom panel discussion on the Continuing Legacy of Exclusionary Housing Practices in Albemarle County. This is a part of the Community Read being put on by Albemarle’s Office of Equity & Inclusion Dr. Irtefa Binte-Farid. Find links to register for tomorrow’s Zoom event as well as the Community Read materials in the Bio.
A brief 9-part series on some of the intersections between Single Family Zoning, Racist Segregation, and Economic Apartheid.
Excited to announce the launch of Mapping Albemarle!! In partnership with the County’s Office of Equity and Inclusion & the County’s Planning Department, a team of all-stars led by My’Kal Lofton & Shirley Hamblet have been diligently combing through 150,000 pages of property records, pulling out every instance of a racistly restrictive covenant, and now we need your help! If you head to MappingAlbemarle.com and click the “Get Involved” button, you’ll be sent directly to our Zooniverse site where every racist deed is in need of review. None of this would be possible without your help, so THANK YOU for EVERY form your support takes. We at the @cvillejeffschool are enormously grateful.